Bandon is the Best!!

In tourism literature, the city is often referred to as Bandon-by-the-Sea.

Surf enthusiasts come to Bandon for surfing & kite surfing Bandon beaches offer a wide variety of surf opportunities for novice, intermediate, and expert surfers of both disciplines. Crowds are nonexistent and locals are friendly and accommodating.

Bandon is a center of cranberry production. More than 100 growers harvest about 1,600 acres (6.5 km2) around Bandon, raising 95 percent of Oregon’s cranberries, and about 5 percent of the national crop. Production averages about 30 million pounds (14 million kg) of berries. Harvest is in the fall. In 1994, 304,000 barrels (48,300 m3) were harvested—a record for Bandon. Some berries are trucked to Eugene and Albany. Others are taken to an Ocean Spray facility in Prosser, Washington, to be concentrated. This crop was introduced in 1855 by Charles McFarlin, for whom the McFarlin hybrid is named.

The Annual Cranberry Festival takes place in the second weekend of September to celebrate the Cranberry harvest. The event draws tourists and participants from all areas of the Oregon coast, Washington and California. Begun in 1946, to honor the cranberry industry, 2016 marked the 70th year of the event. Bandon has long been known as the “Cranberry Capital of Oregon”. 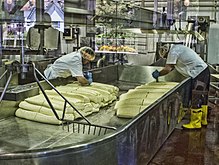 Between 1928 and 2000, dairy production and cheesemaking were an integral part of Bandon’s economy. The Bandon facility was damaged by fire in 1936, and rebuilt as the Surfside Dairy in 1937.[18] In 2000, Tillamook County Creamery Association bought the Bandon Cheese brand and promptly dismantled the factory;[19] on October 4, 2005, the last of the staff was released and the Bandon factory closed.[18] The Bandon Cheese name lives on as a brand of Tillamook Cheese.

In 2013, Face Rock Creamery opened on the former Bandon Cheese property with participation of the city government.[20] Cheesemakers handcraft gourmet cheeses from beginning to end with viewing, sampling, and products available to visitors.[21] There is a selection of flavored cheese curds which one cheese critic received favorably.[22] The lead cheese maker for Face Rock Creamery is the son of the lead cheese maker from Bandon Cheese Factory.

Bandon Dunes Golf Resort is a complex of six golf courses located just north of the city of Bandon. Five of the six golf courses are regulation length and the other is a short 13 hole par 3 course. The championship courses, Bandon Dunes, Old Macdonald, Pacific Dunes, and Bandon Trails are the top four courses in Oregon, (Passov, J., Golf Magazine, “Top 100 Courses You Can Play”, Sept., 2016, p. 62).

We are also continuing our volunteer leadership in our community by donating 10% of our time back to the people of SW Oregon.

We also continue our Help for Deployed Soldier Families Foundation. This is a program where we go in and help with the little everyday things that go wrong around the house that may be causing the family problems while members are deployed.

These are tough times for everyone, so lets all work together and keep the synergy going.  Remember, pass it forward, or in other words, do something good for somebody everyday, even if its a small gesture.

You will be surprised how much of a difference you can make in someones life.

U S Homebuilders was just honored with a beautification award for our downtown work on the Castle Building.